I have shot several disciplines of shooting competitions over the years and have learned a few things regarding ammunition and bullet function during this time. Below I will describe a few of the things I have seen and benefited from. Hopefully if you find your situation to be similar you can make changes before experiencing some of these effects.

Frequently the matches I shoot require 40 to 100 shots before a person gets a chance to clean their rifle. Just as frequently, a good shooting match rifle will still shoot very good scores and groups with that many rounds fired through them. However, those guns do not deliver the same accuracy as when they were clean, but the drop-off in accuracy is not a huge change unless a set of accumulative issues arise. 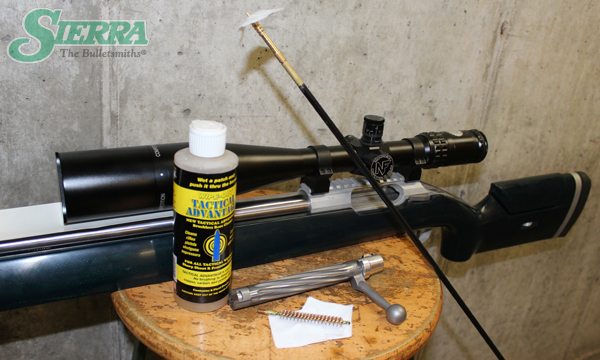 I witnessed a set of problems that occurred with a fellow competitor’s rifle at a recent F-Class match. He was using a large case capacity cartridge for the bore diameter and he was shooting a powder that was burning extremely dirty. As the match progressed, the carbon buildup caused most likely a carbon ring in the throat of the rifle and pressures kept increasing to the point that the cases were hard to extract, bolt lift was excessive, and eventually he quit shooting the rifle due to these issues. Accuracy also suffered as could be evidenced by the gun’s performance on target. This load looked fine when he was developing it, none of the excessive pressure signs appeared when he worked the load up, but he was cleaning the gun every ten shots. When he was shooting multiple 20 shot strings during the match is when the issues appeared. He was able to give the gun a thorough cleaning and the issues went away, for several rounds and then the pressures started appearing again. These pressure signs were not due to ambient temperatures as it was a cool spring morning and the temperature was in the low 40° range.

A couple of years ago, I attended a match early in the shooting season and it was unusually hot for that time period. I heard a competitor worrying before the match about his gun “blowing up”. At first I was concerned, but after thinking about what he had said I realized that he meant his “accuracy” blowing up, meaning he knowingly had loaded his ammunition at the top end of an accuracy tune that he established via a ladder test. The next day I asked him how his scores were and he said the gun was not shooting very well initially, but he had found enough equipment from friends that were at the match and had pulled the bullets, reduced the powder charge by a few tenths of a grain and re-seated the bullets and his gun was now shooting normally. The temperature difference between his home range the weekend before when he established his load and the match conditions was about 30 degrees and that was enough to cause an accuracy change at 1000 yards.

I recently shot some 9mm pistol loads in the Sierra underground tunnel. I was shooting an XP-100 return-to-battery test gun for this evaluation. The testing was conducted with all components as consistent as possible with the exception of the cartridge case brand. My intention was to show a fellow employee what can happen when you change a component without testing to see if it has an effect on pressures, function, or accuracy. I was shooting five-shot groups at 50 yards and reloading the same five cases, without exception every time we fired a particular case made by a different manufacturer than the other four that bullet went out of the group, and it moved a significant amount (approximately 2 inches from the center of the other four rounds). I then loaded that individual case four times and fired a four-shot group that was comparable to the groups achieved with the other four cases. Even though the cases were sized with the same die you could feel resistance with the bolt when the odd case was chambered and its’ point of impact was different than that of the others.

The point of these observations is to suggest that when accuracy counts, you must take into consideration the conditions you will be shooting in and adjust if necessary. Some conditions you can manage, like barrel cleaning. Other things like temperature you cannot control but you can make adjustments based on the differences between your testing and utilization of the load.