Posted on December 9, 2015 by Sierra Bullets 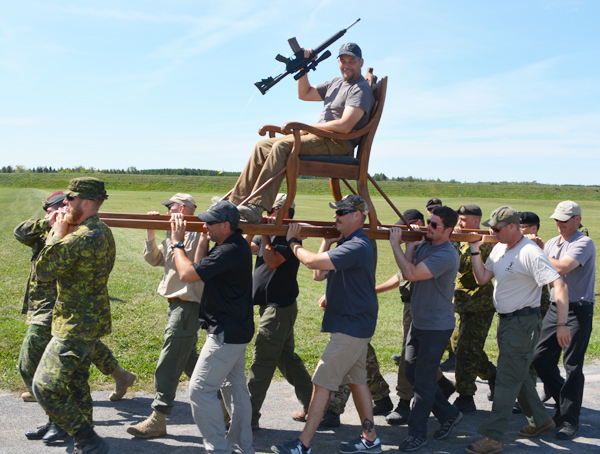 I managed my second Canadian Service Rifle Championship in a row and this year I was shooting your .223 77 MatchKings #9377.  Canadian service rifle consists of 4 different types of matches run at the  200, 300, 400 and 500m points. We first shoot a deliberate slow fire match with pulled and scored targets at each distance. The V ring (X Ring) is 3 inches in diameter.

Then we fire a snap shoot with targets operated from the butts. Exposures are quick and the targets are small. At 200m you are also shooting it from the kneeling position. The V ring is 6 inches across.

Third match at each range is a rapid fire match. It is shot on 2 figure 11 type military targets and at 200m is shot from the sitting or kneeling. You have 30 seconds to get into position and fire 5 shots on one target, change mags, and fire the other 5 on the second target. It’s quick and you must manage the recoil well. The V ring is a rectangle 4 inches by 8 inches tall.

The fourth type of match is fire and movement. You will start 10m back from the firing point. When the target appears you will run up the mound drop into position and fire 2 shots. Then when the target appears again you will run down to the next firing point(100m) and shoot again until you end at 100m. Shooting positions are: standing at 100m, Kneeling or sitting at 200m and prone at 300, 400, and 500m. It’s very challenging and produces some pretty good shooters.

The matches are finished with the most fun 500-100m rundown. Half a kilometer of fun!

Anyways I shot well and came away with my second national championship. For matches 1-16 I scored 761 with 77Vs/800. Not a record but not bad either.

Thanks for making such consistent match bullets! I’ll be shooting them for the foreseeable future.

My service rifle setup is an ArmaLite® upper and lower with a Geissele® trigger and a Krieger® barrel. I run a Vortex HST 4-16×44.