I was handed a small sample of 223 cases the other day and was asked if I could comment on some marks and appearances that had been noticed as they were sorting through the cases. I will share what was observed and give you what would seem to be a cause for them. These were from an unknown source, so I have no way of knowing what type of firearm they were fired in or if they were factory loaded or reloaded ammunition.

Case #1 was seen to have a very rounded shoulder and split. Upon first look it was obvious that this round had been a victim of excess pressure. The firearm (perhaps an AR?) was apparently not in full battery, or there was possibly a headspace issue also. While taking a closer look, the primer was very flat and the outside radius of the primer cup had been lost. High pressure! Then I also noticed that there was an ejector mark on the case rim. This is most certainly an incident of excessive pressure.  This case is ruined and should be discarded.  See photo below.

Case #2 appears very normal. There was some question about marks seen on the primer. The primer is not overly flattened and is typical for a safe maximum load. There is a small amount of cratering seen here.

This can be caused by a couple of situations. Cratering is often referred to as a sign of excess pressure. With safety in mind, this is probably something that should make one stop and really assess the situation. Being as there are no other signs of pressure seen with this case, I doubt that pressure was unsafe. That leads us to the next possibility. This can also be caused by the firing-pin hole in the bolt-face being a bit larger than the firing- pin, and allowing the primer to flow back into the firing-pin hole causing the crater seen here. This can happen even with less than max pressures, in fact it has been noted even at starting loads. Always question whether pressure is involved when you see a crater. In this situation, I lean toward a large firing-pin hole.  This case should be safe to reload.

Case #3 appears normal with one exception. There are two rings seen about one half inch below the base of the shoulder. 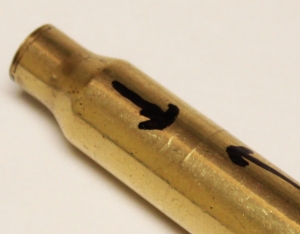 Two rings about one half inch below the base of the case shoulder.

These rings are around the circumference of the case, one being quite pronounced, and the other being noticeably less. As we do not know the origin of the firearm in which this case was fired, it does seem apparent that the chamber of the firearm possibly had a slight defect. It could have been that the reamer was damaged during the cutting of this chamber. I would suggest that the chamber did have a couple of grooves that imprinted onto the case upon firing. This firearm, while maybe not dangerous should be looked at by a competent gunsmith.  In all likelihood, this case is still safe to use.

Case #4 has no signs of excess pressure. There is a bulge in the case just ahead of the case head that some might be alarmed by. 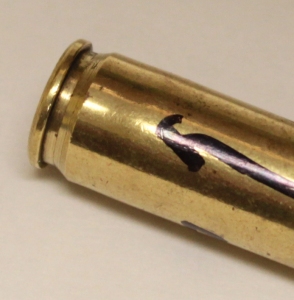 Bulge in the case just ahead of the case head.

This bulge is more than likely caused by this case being fired in a firearm that had a chamber on the maximum side of S.A.A.M.I. specifications. There is actually no real issue with the case.  Note that the primer would indicate this load was relatively mild on pressure.

The primer would indicate this load was relatively mild on pressure.

If this case was reloaded and used in the same firearm numerous times there might be a concern about case head separation. If you were going to use this case to load in an AR, be sure to completely full-length re-size to avoid chambering difficulties.  This case would be safe to reload.

Case #5 appears very much like case #4. The bulge is not as pronounced as on the R-P case, and if fired in the same gun, may simply be because the Lake City case is slightly heavier walled.

The primer again shows that there was no excess pressure involved. This could probably be termed as “normal”.  This case would be safe to reload.

Case #6 shows some rings around the circumference that are very light and hardly noticeable.

Rings around the circumference of the case are very light and hardly noticeable.

This was fired in a different chamber than case #3, as the rings are in a different location and not as heavy. The primer looks good and there are no pressure issues with this case.  This case would be safe to reload.

The primer would indicate this load was normal.

It is very important to observe and inspect your cases before each reloading. After awhile it becomes second nature to notice the little things. Never get complacent as you become more familiar with the reloading process. If ever in doubt about a situation, call us at 1-800-223-8799.