I debuted the little Dasher at St Louis at the 2013 600 Yard IBS Nationals under less than perfect conditions and no experience.  So what will 2014 have in store for me?

To find out, I went to the first match of the year within easy driving distance in this part of the country.  That happened to be May 3 & 4 at Vapor Trail Valley near Spickard,    Missouri.  If that sounds familiar, it may be because that is where Co-Shooter of the Year, Junior Shooter of the Year, and Rookie Shooter of the Year all come from.  None of that good shooter stuff rubbed off on me before, but maybe I hadn’t been exposed enough.

Saturday morning dawned bright and clear, but as the sun began to rise we were shrouded in cloud cover and a light breeze stirred.  The temperature was very cool, low 50s.  I was going to change scopes before the match but there were several other shooters needing bench space so I left my old but trusty 8-32X Signature in place and answered the call for my relay which was relay two.  Sometime between the safety meeting and the first relay it dawned on me that this was a 1000 yard match!  All along I was focused on 600 yards, what was I thinking?  That was kind of a daunting realization since my cartridge of choice HAD BEEN a 300 Win Mag with 210 grain MatchKings for 1000 yards.  You basically ignored anything (short of a tornado) and just shot through it, minor shifts meant nothing.  With these tiny 6mm 107 grain Matchkings @2900 fps – probably not.  But too late now …. the time had come.

As I pulled my cart up the ramp and headed towards my bench I felt a little anxiety, just what will happen at 1000?!  I would know in about 15 minutes.  Five minutes to get setup, 6 minutes of unlimited sighters and a minute or less to get 5 perfectly placed shots on target, it won’t be long now.  With the little rifle in the bags I noticed how well it tracked back and forth, staying on target.  I was centered up on the sight-in gong and broke a clay pigeon with 30 seconds to go.  As I waited for the cease fire I moved my dot to the record target and placed my 5 record rounds in the Sure Feed.

“Cease fire, that ends the sight-in period.  Ready on the right, ready on the left, ready on the firing line, commence fire,” I heard over the speakers.  I put a cartridge in the tray and closed the bolt.  The dot settled in the sighter patch and there was the familiar jolt from recoil and open the bolt for another Dasher.  In a few short seconds it is all over and I raised my head to see who else was still shooting.  As I removed the bolt and held it high to signify I was finished I felt good about my target.  I almost always do but generally it doesn’t come back the way I remembered it should look.  Target gremlins I guess, but now it was wait for the scorers.

As I came off the line, Gene Ford asked if I was going to change scopes.  Up to that point I hadn’t decided but that did it.  The new scope was going on before the next relay.  Word spread and there are always willing hands for which you are always grateful.  It didn’t seem like a big deal to me but it sure did to some of the guys.  The biggest challenge was determining which way the two piece 20 minute base went on!  Out came the calipers from all directions and in a few minutes we had a majority agreement.  In my hast I managed to drop a base mounting screw in the gravel prompting a major screw hunt.  Only to find it after all the “eyes” gave up the search, to which  Jim Bauer exclaimed I was “one lucky devil.”  After that it all went together quite nicely.

“Targets are up” came the call and with tempered anxiety I sauntered over to the target stack.  I found bench #9 and took a peek, not bad, 5.776 inches for group but a low score of 35 which meant I was not centered up as well as I should have been.

I’d been told about the new reticule in the Burris XTR and seen it at the SHOT Show but not shot it yet.  It looked good.  First focal plane was different however.  Turn the power up and not only does the target enlarge so does the reticule.  There’s lots going on in there with half MOA graduations on the vertical as well as the horizontal planes.  But it didn’t seem distracting.  I was ready for the second relay and the wind was building.

The familiar range commands blared out and the sight-in period for Match 2 was under way.  Gene Ford and Nate Peterson got me on the berm and I got centered up quickly but my 107s were plagued by gusty winds.  And, although it was in the mid-60s under the midday sun the breeze made it quite cool in the shade of the covered benches.   As the sight-in period ended I was thinking I could use a jacket.  In the blink of an eye the shots for record were down range and two relays of 1000 yard light gun were all over except for the crying.  The targets came out quickly this time and my second target recorded a 8.151″ group with a score of 37 low at 6 o’clock.

All in all I was happy.  On to the next challenge, 600 yards the next day.

Sunday morning dawned cold with wind out of the East when I stuck my nose out of the motel room about 6 AM.

I hurried to get dressed and grab some breakfast so I could get to the range early.  I still had to get on at 600.  As I pulled into the range there were several shooters already there and not the same ones that were there Saturday.

“Good morning” greetings were flying all around as we busily unpacked rifles and gear.  For me it was essential I get to a bench and at least “get on the berm” at 600 yards from my Saturday 1000 yard zero.  Gene and I decided to come down 20 MOA from the 1000 yard zero and I’d be close.  We were right and I was on the sighter plate in two shots.  That long sleeve shirt felt great in the cold breeze. 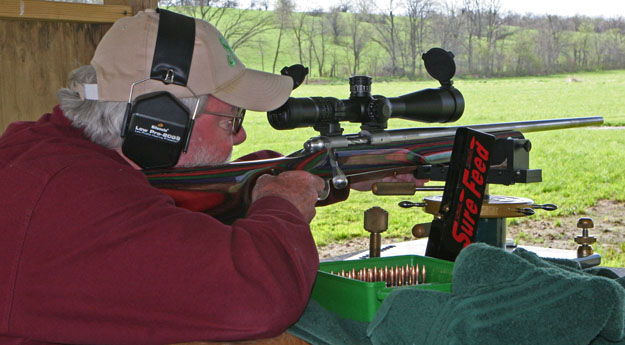 As I progressed through the 4 targets of the day the clouds stayed and the breeze got stronger and it got increasingly difficult to keep all your shots on target.  I ended up using all the windage I had in my scope adjustments and using an additional 4.5 MOAs of reticule windage.  That’s a lot!  I did manage to print all my targets for which I was thankful.  The little Dasher, even saddled with its inept driver, managed a 4 target agg of 5.8953″.

Again the rifle performed great.  It tracked straight and true.  There were no function issues and the action was smooth and effortless.  Something notable did happen during the match but it involved the new Burris XTR scope,  I thought I could see my 6mm bullet holes on 40 power occasionally at 600!  Not all the time, but when the light was best I thought I could.  We’ll see.

It was a cold 66 degrees mid-afternoon when I left the range near Spickard but in the early evening, when I got home, 120 miles south it was 85 degrees and my wife couldn’t believe I had worn a long sleeved chamois cloth shirt all day.  I guess you just had to be there.

Oh, and just for the record, I don’t think it has a thing to do with the water.