I was fortunate to be able to spend time in Trinidad, Colorado this past June teaching a week long NRA summer course titled “Reloading A-Z”  at the Trinidad State Junior College Gunsmithing School.  The weather was great, with cool evenings and mornings and even though the afternoons were warm the low humidity made for comfortable mid-days.

I had a full class ranging in experience from beginner to very accomplished.  We started with the very basics, progressed through sorting your components, on to special advanced precision reloading and finally load evaluation.  We even touched on proper rifle cleaning methods.

One of the highlights of the class is using new equipment.  This year we used the new Lyman Turbo Sonic 2500 Case Cleaner which is a medium sized ultra sonic case cleaner that performed very well.  The class kept it running for 3 full days.  Some of the cases were very stained before but emerged clean and well used cases came out looking new inside and out, primer pockets included.  It got high marks from all.

We also used the Lyman Case Prep Xpress which is a multi-position motorized case prep station that performs all the necessary prep functions except for the actual trimming.  Again this tool ran for three days straight and proved its worth time and time again.  It is very interesting to see the array of tools shooters bring with them.

Although it arrived late the Forster Co-Ax press with its snap-in die installation and instant concentricity improvement was invaluable.  We also got a firsthand look and use of the new Datum Dial measurement system from Forster Products which gave us fast and accurate measurements of loaded ammo, headspace for setting dies or sorting and gauging bullets.

As the class progressed we loaded and in some cases unloaded ammo in preparation for the last day of class which was spent near Raton, NM at the NRA Whittington Center.

Thursday evening we had graduation ceremonies and an excellent dinner in the Student Union on campus.   It was very well attended and my class gave me a Trinidad cap signed by all the students.  Thanks to all of you guys, I really appreciate it.

Friday was the last day.  The class assembled at 8 AM and we caravanned south down I-25 past Raton, NM to Highway 64 turning West and on to the Whittington Center where we checked in as a group and gathered at the 200 yard sight-in range.  After everyone got setup and zeroed, some tried the 300 yard targets but some sharp-eyed shooters found a metal coyote, a buck mule deer and a buffalo at distances from 400 to a 1000 yards.  From that point on it was every silhouette for itself. 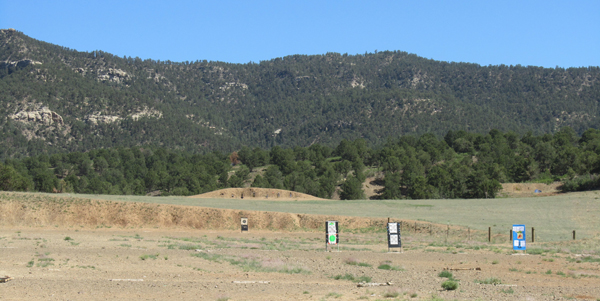 I think Will shot the smallest group with a 7Mag that belonged to Evan, but Evan shot a runner up group with his own rifle almost as good.  It was a great day that ended far too soon but it does get hot out there in the desert and hydration is essential.  As usual I didn’t take enough drinks to keep all of us out there all day so by mid-afternoon we headed back to Trinidad.  Some were already headed in the right direction for home and we said our goodbyes and went our separate ways thus ending another very enjoyable class.

On Friday there were 15 fires raging in Colorado up and down the front range.  None of the fires effected us directly but you couldn’t watch the local news and not be effected to some degree.  The air smelled like a camp fire for miles and my heart goes out to all those people who were affected.  I can only hope the current rains have extinguished the blazes.