On January 7, 2013 Nathan Mondloch of Montana wrote us:

“My name is Nathan Mondloch, I am 29 years old and have lived and hunted in southwest Montana my entire life. This success story starts when I was seventeen years old. I won a rifle in a game called “Cut the Cards” at a Rocky Mountain Elk Foundation Banquet.

The story:  As my father and I walked into the banquet, I told him that I have saved ten one dollar bills from my weekly lunch allowance and was determined to win a rifle. He proceeded to try and talk me out of doing this of course and to play some of the other games instead. I however knew that this night was going to be my lucky night. When the time came to buy the playing card I made my move, buying a two of clubs insured that I had at least a chance for the rifle. When the drawing started I waited in anticipation as the gentlemen running this raffle narrowed down the list. Finally I was standing with one other person as the announcer stated “will the person holding the two of clubs please raise your hand and come up here to verify that you in fact have won this rifle.” I had won a Tikka model 695 whitetail chambered in a 300 Win Mag, and could not stop smiling for hours.

The next challenge was to find a bullet that would not only work in the rifle, but kill fast and effectively. My father had shot a 300 for several years before this and had good success with the round in harvesting game. I however didn’t like the bullets that he was using because in my mind they didn’t kill as quickly as I thought they should. So I began doing research and found that the bullet I used in my 30-06 would work in my new rifle and did what I wanted it to. The quest for a bullet I liked was over.

The bullet was a .30 caliber Sierra 165 grain Spitzer boattail (#2145). I picked IMR 4831, a moderate burning powder, out of the 50th Anniversary Edition reloading manual and started loading. Turns out that I hit the jackpot on the first batch, the rifle and load where a perfect match. I am able to shoot a 3 round ½” groups and a 5 round 1” groups at a hundred yards. 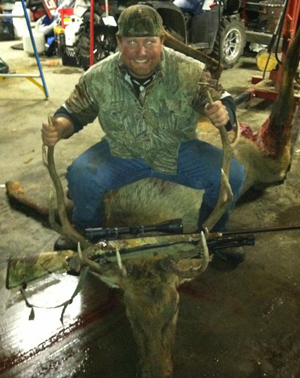 This year I finally got my chance to fulfill my life long goal of harvesting a Rocky Mountain Elk. On November 17, 2012, I was hunting with my father in southwest Montana when we spotted two bulls (only one was legal). I pulled up the rifle, aimed and shot. The 5×5 bull dropped in its tracks. After getting the animal dressed out and back home it hit me that where I harvested this bull was the exact same spot that I harvested a mule deer buck with my bow the year before.

The next day, my father and I were on a mission to fill his elk tag and went back to the same area. I found my tracks from the day before and from the exact spot I took the shot to where the bull met his demise was exactly 297 yards according to my Leopold Range finder. The shot angle is between 60 and 80 degrees on an uphill angle.

For years I have dreamt that my first elk would be a bull and that my father was by my side to see the shot and share the mood, excitement, and joy of the kill. That being said, I want to thank the bulletsmiths of Sierra Bullets for producing a high quality bullets and data. Of all the factors and players that where involved in this story you played a vital part by designing the bullets that flat out work and I will continue to use nothing but Sierra bullets.”